Daily Israel Excursion from Kemer is a bridge that connects lovely holiday resort of Antalya to one of Christianity’s centers, Israel. After departing from Antalya and borders of Turkish Republic, a well-arranged, interesting and striking tour day waits for you!

Highlights of Israel Excursion from Kemer

hide
1 What is included?
2 What is not included?
3 What to bring with you?
4 Highlights of our Israel Tour
4.1 King David’s Tomb
4.2 The Church of the Nativity
4.3 The Last Supper Room (Cenacle)
4.4 Church of the Holy Sepulcher
4.5 Western Wall
5 Visit Israel with Us

We will visit where Christ was born!

Highlights of our Israel Tour

In these sacred lands, we will visit Christian world’s most significant structures that will strike you with their captivating atmosphere and fascinating buildings. They are:

When visiting these valuable tourist attractions, holiness, peace and high vibes will be your companions as well as our professional tour guides.

Before giving more details about highlights of the tour mentioned above, we would like to remind you tasting delightful examples of Israeli cuisine. Some of these gastronomic wonders are shakshuka, bassbus and hummus.

Now, we can learn more about the places we will visit during Israel Tour from Kemer.

King David’s Tomb, which is located in Mount Zion in Jerusalem -near Abbey of the Dormition, is considered by some to be the burial place of biblical king David of Israel even if it’s not proven yet. However, this issue doesn’t descend the significance of this landmark, especially in the eyes of Jews: King David’s Tomb is a sacred place for Judaism.

A legend says the treasures of the First Temple were buried beneath the tomb of David. And that’s why the tomb was destroyed several times by the Mamluks, Persians and Crusaders, damaging on the shrine of three religions – Islam, Christianity and Judaism.

The Church of the Nativity

Vastly known as “Church of the Birth of Christ”, The Church of the Nativity is believed to be the birthplace of Jesus. This Unesco-designated world heritage will probably fill you up with amazing feelings such as admiration, excitement and peace.

It was erected in the 4th century by Queen Helen and has never been destroyed. The Persians mercilessly destroyed all the shrines and Christian buildings, but due to the fact that the facade of the Temple was covered with a fresco, it was protected from the invasion of the conquerors of the Holy Land.

The Church of the Nativity is one of the most sacred Christian sites in the world since at least the 4th century AD up to today, Unesco states. And you will be able to embrace this holiness.

The Last Supper Room is what inspired Michelangelo to paint his famous work “The Last Supper” by being one of the holiest places for Christianity: This room is where Christ dined for the last time with his apostles, before his crucifixion.

Its Gothic-Christian style, meaningful atmosphere, captivating view and historical wealth makes this place quite significant for all people instead of only Christians.

Church of the Holy Sepulcher

After being captured by the Roman soldiers, Christ was brought to Church of the Holy Sepulcher to be crucified. He was murdered then, and where he was buried and resurrected is also here. The empty tomb of Jesus lies beneath this place.

Due to this much of importance, it’s one of the main pilgrimage centers for Christians.

Western Wall, generally known as Wall of Tears, is a unique place and last stop of our amazing journey, Israel Excursion from Kemer.

After the destruction of the Temple, the wall with its enormous sizes – 9 m height and 57 m length- arises from the ruins and later on became a spot for mourning, crying and praying for the revival of Israel. It is a very holy place for Jews and has a very authentic atmosphere.

Visit Israel with Us

We will provide you with a comfortable trip along with professional guidance, tasty foods and information. Embrace the country where 3 religions meet and create such a powerful image all together!

You can book this tour easily or contact us first for further information!

Reviews About Israel Excursion from Kemer 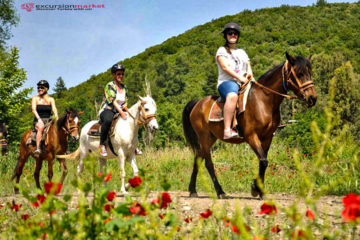