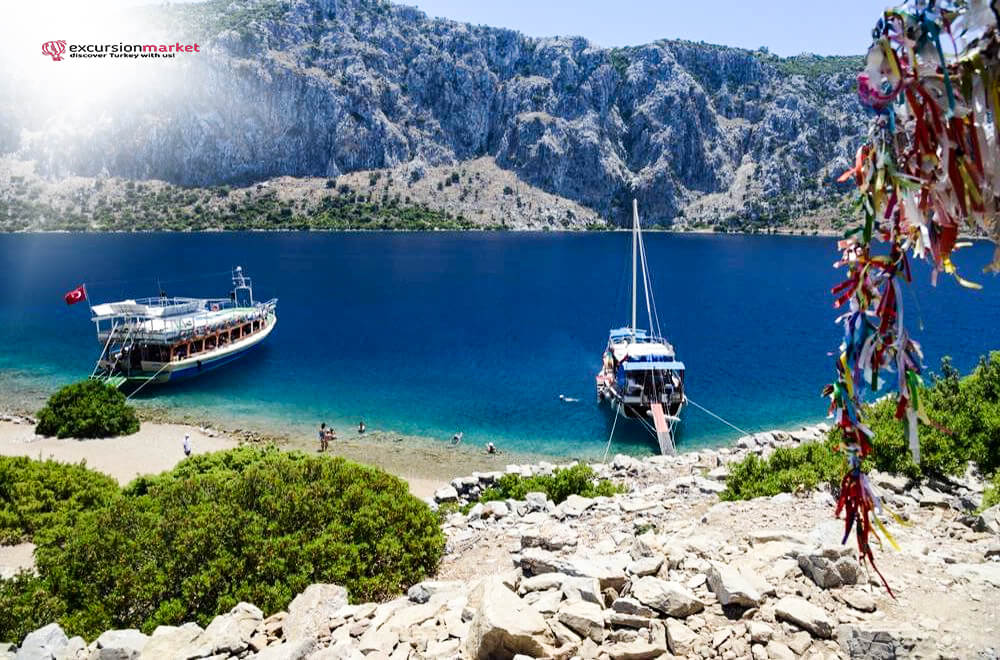 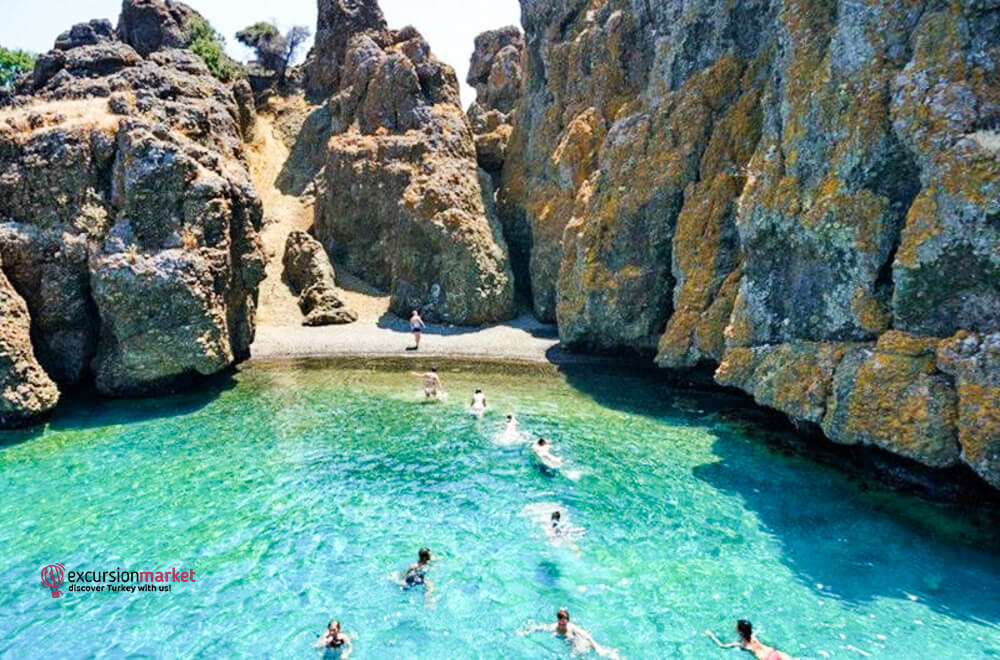 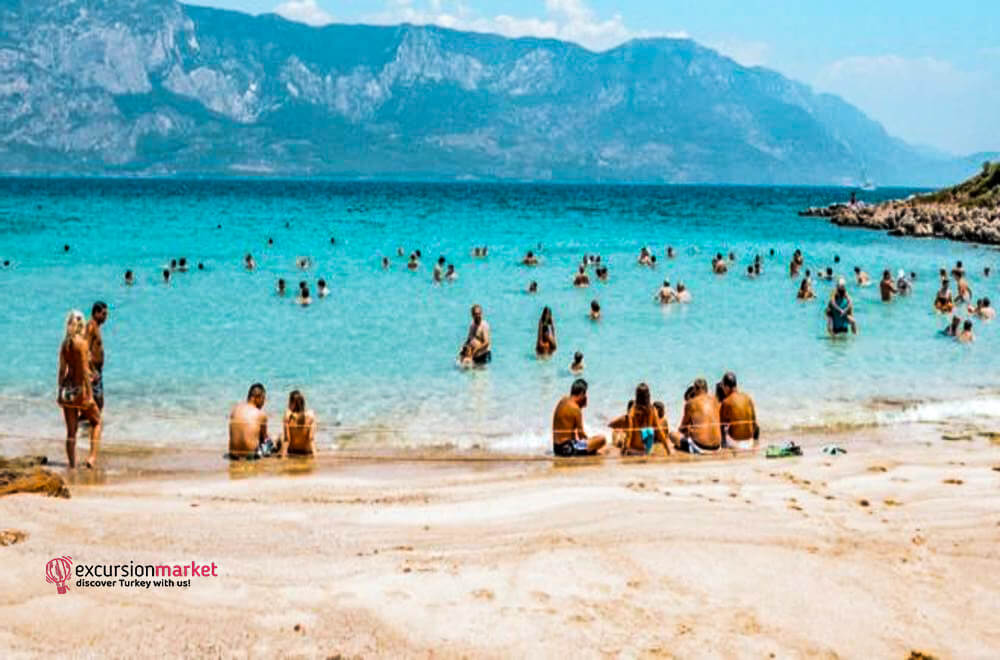 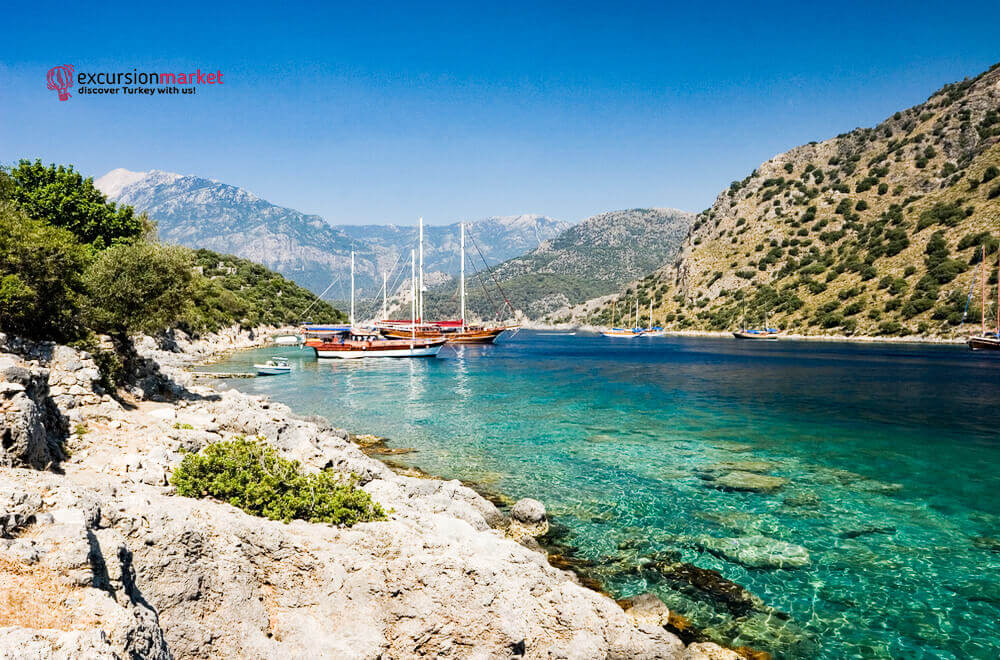 Marmaris Hisaronu Aegean Islands Tour takes you to the beautiful bays of the Gulf of the Aegean Sea – the Gulf of Hisaronu.

Highlights of this excursion hide
1 What is included?
2 What is not included?
3 What to bring with you?
4 You May Also Like
5 What Can You Expect from This Boat Trip?
5.1 The Exclusive Boat
6 The Swimming Stops of Marmaris Aegean Islands Tour
6.1 Orhaniye Bay
6.2 Selimiye Bay
6.3 Camilla Island
6.4 Sharp Teeth
6.5 Rabbit Island

While slowly sailing on a boat from one island to another, you will see an incredible variety of shades of water – from pale emerald green to deep blue.

Also, you will feel the pleasant warmth and useful salinity of the Aegean Sea, while making five stops for swimming in the amazing bays.Moreover, at Camellia island, you can:

make a wish at the ancient olive trees,

and be in the magic circle of the mosaic panel in front of the church. On the island of rabbits, you can feed the rabbits.

What Can You Expect from This Boat Trip?

Firstly, get ready to enjoy the alluring, spectacular and rich natural beauty of the Gulf of Hisaronu through Marmaris Hisaronu Aegean Islands Tour.

This bay is a half hour drive from Marmaris and surrounded by two protected areas – Bozburun Peninsula and the Datca peninsula.

The best thing about it that you will spend the whole day on a boat in the sea, making a circle around the Gulf of Hisaronu and moving from one island to another.

Moreover, you will see water changing color – from pale turquoise, emerald green to dark blue, and changing its temperature and concentration.

On the pier next to the hotel for the UC-PA surfers, you will get on a 2-deck boat during Marmaris Aegean Islands Tour. Its lower deck has indoor lounge, with sofas and tables, where you can hide from the sun, and take advantage of the bar where you dine.

And the upper deck is under the open sky with sun beds and mattresses set where you can sunbathe and dance to the fiery Turkish music if you like.

During this journey you will experience five stops, and you will spend 30-40 minutes on each of them.

As a note here, all stops are not guaranteed depending on the level of demand during high seasons.

Now, let’s learn them all.

The first stop of Aegean Islands tour will be Orhan Bay.

This bay is where you go past one of the largest marinas of the Aegean coast of Marmaris district of Martha Marino, continue past the beach,

Kiz Kumu, globally known as Maiden Sand that has a marina with a restaurant and a spectacular sand.

Another funny name of the bay is the bay of drunks. It is said that Selim II was a great lover of wine, especially the Greek, and a passionate admirer of female beauty.

According to one legend, this is also where he died after falling off from a cliff.

The third stop of Marmaris Hisaronu Aegean Islands Tour will be Camellia Island. Here, you will not only swim, but also take a walk along the path to top of the island to see the ancient Byzantine church of the 12th century.

From the church, only the walls have remained.

White, black and pink mosaics surround the area. Near the church, there are two magical places: one of them is where people make wishes of a material nature (an ancient olive tree, which still bears fruit), and the other is for the non-materialistic desires (mosaic circle at the entrance to the church).

The volcanic island is so named because the hardened lava with a bird’s-eye view is similar to the open mouth of a giant dragon. It is believed that so many small shells on the island bring good luck in financial affairs.

Lastly, we will get to Rabbit island. You swim up close to a private island owned by one of the best and most expensive hotels in Turkey, formerly known as SelectMaris.

It was conceived with the aim to find a secluded place, to the rich and famous people, stars and politicians, to unwind, and get away from the increased attention of inhabitants and the press.

Then, the ship will get to the island, where you can see and feed the rabbits introduced by the hotel for guests’ enjoyment.

If you get excited already, contact us and come aboard!

(PS: The route might change on the tour day!)

To be honest, in my naivety, I thought that we would see directly the confluence of the seas 😀 But this is just a beautiful name or I was looking in the wrong place 😀 I really liked the excursion itself: a long thoughtful route, many stops along the way, we had a lot of swimming right in the open sea. The weather was also lucky: no breeze, no clouds. Thank you. I am satisfied.

We had a vacation in Marmaris, we chose a boat trip with the romantic name “The confluence of two seas”. We sailed on a fairly large double-deck boat: on the lower deck there are tables and benches, and on the upper deck there are sun loungers. There is also a hold, there are toilets. The program of our walk included a visit to several bays, a phosphorus cave and a stop to swim in the open sea. It was interesting to look at the coastal line from the sea side – Marmaris is a very beautiful town. And then we left the bay straight into the open sea. The name of the excursion was given for a reason. Marmaris is indeed located at the confluence of two seas: the Aegean and the Mediterranean. So you can confidently say that you rested and swam there and there. We spent about an hour in a nice place called Turunc, and just before leaving home we stopped at a phosphoric cave. I did not notice a special glow there :)) I liked the excursion, I recommend it for the trip

Of course, I wanted to roll out a big angry letter. But Excursion Market saved my vacation from complete disappointment. They just threw me on two excursions that I bought on the street. Colorful booklet, persuasion and low cost did the trick. As a result, no money, no excursions, no this distributor. We can say stayed with a nose.
But the desire to visit beautiful places was stronger than the disappointments. I decided to act more sensibly. I arranged everything through WhatsApp. I read the reviews, got acquainted with the excursions. And I chose the excursion The confluence of the two seas. Three islands and bays. During one excursion I visited two seas))) My delight simply knew no bounds. Big ship, oddly enough – few tourists, friendly staff, music and swimming))

Everyone writes that they are looking for something in advance. I was looking through the excursion services and purely by chance saw that very excursion on a yacht along the bays of Marmaris and Ichmeler (the confluence of two seas)
After looking at the photo, I realized that this is the place where I should be. And thanks to this, I spent my vacation in Marmaris. Well, I just threw off all the annual load)
One sunbed was provided for each tourist, that is, there was no need to stand all the time, but you could really rest. We had five or six stops. Four of them with bathing. Drinks, lunch all inclusive. You can make a wish in the phosphoric cave. Take your coins, not local ones, to make your wish come true. It worked for me)) I recommend the tour to everyone.

Everything is clearly well organized, good transfer, picked up from the hotel and brought back. We took vouchers from Excursion Market. Wonderful, competent, well organized. They also helped with the choice of the excursion. I recommend. 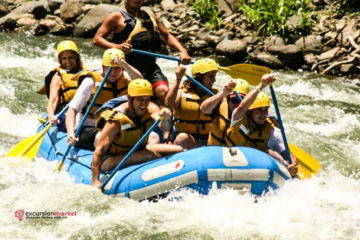 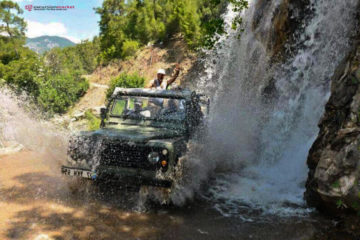 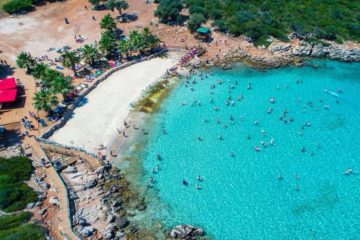