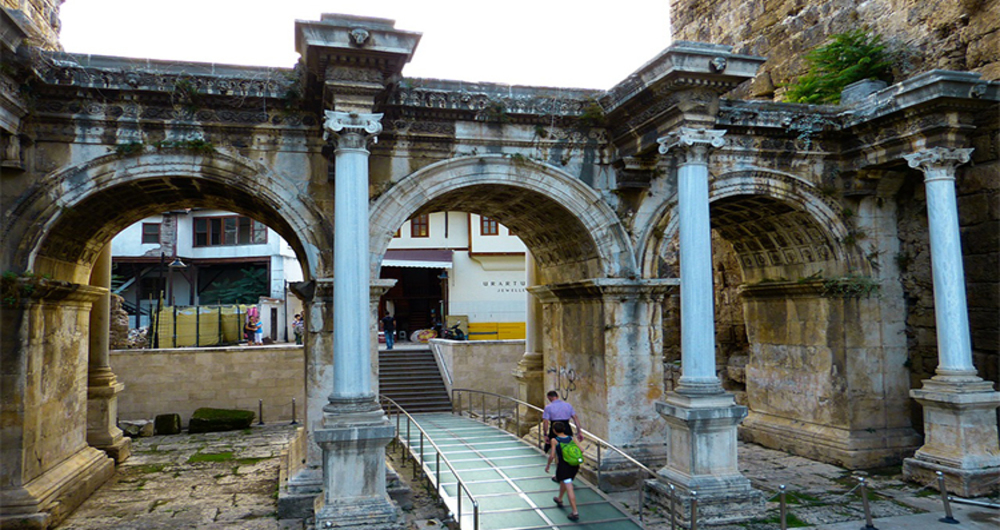 One of the most beautiful monuments of Antalya is undoubtedly the monumental gate leading to Kaleiçi. They are called Hadrian’s Gate (Hadriyan Kapısı) or Triple Gate (Üçkapı).

The first name reflects the ancient history of the city, when the Roman emperor Hadrian visited it in the second century AD, and the second name refers to the appearance of the monument, which has three arches.

History of the Hadrian Gate

Hadrian’s Gate was built in 130 AD to commemorate the visit of Emperor Hadrian to Attalea (as Antalya was called during that period ). The gates were included in the walls surrounding the city and became the main entrance to it.

The two towers on either side of the gate belong to different periods of history. The south tower dates back to the Roman era, while the north tower was built during the reign of the Seljuk sultan.

From the time of the Roman Empire, only their lower part has been preserved. This tower also has an inscription in the Old Turkish language in Arabic script. 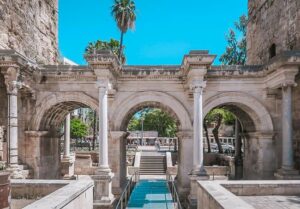 Hadrian’s Gate was rediscovered to the Western world by Francis Beaufort, who in 1817 published a description of it in his travel diary along the southern coast of Asia Minor. This text contains information about the higher gate level. Apparently, they were destroyed later – in the 19th century.

At the end of the nineteenth century, the Polish explorer Karol Lanckoronski described the state of preservation of Hadrian’s Gate as follows: “Today they are buried at a depth of several feet and are only visible from the outside.”

Previously, Hadrian’s Gate was built into the city wall and was not used for many years. Most likely for this reason, the building is well preserved. In the 1950s, the walls were destroyed, and the gates, on the contrary, were reconstructed (at the end of the 1950s).

To show the original Roman era road, the modern pavement was removed. Now the old road is covered with organic glass. Under the glass on the road, you can see deep furrows from old carts passing by.

Nowadays, Hadrian’s Gate is one of the highlights of visiting Antalya and a place where almost every tourist wants to take a memorable photo. 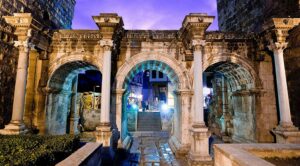 Hadrian’s Gate resembles a typical Roman triumphal arch. The gate has three arches of the same size: 4.15 meters wide and 6.18 meters high. The entire structure is over 8 meters high, measured from the ancient pavement to the top of the gate.

The front and back sides of the gate are decorated with facades consisting of four columns each. The monument is built of white marble with granite.

How to get there? 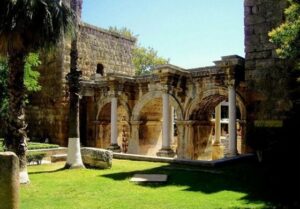 Hadrian’s Gate is located on Ataturk Boulevard in the center of Antalya. They can be reached on foot, while walking through the historical district of Kaleici or by tram. The tram line is called Nostalji tramvay.

Previous postThings to Do in Antalya
Next postBoat trips in Antalya