Things to Do in Antalya

Things to Do in Antalya 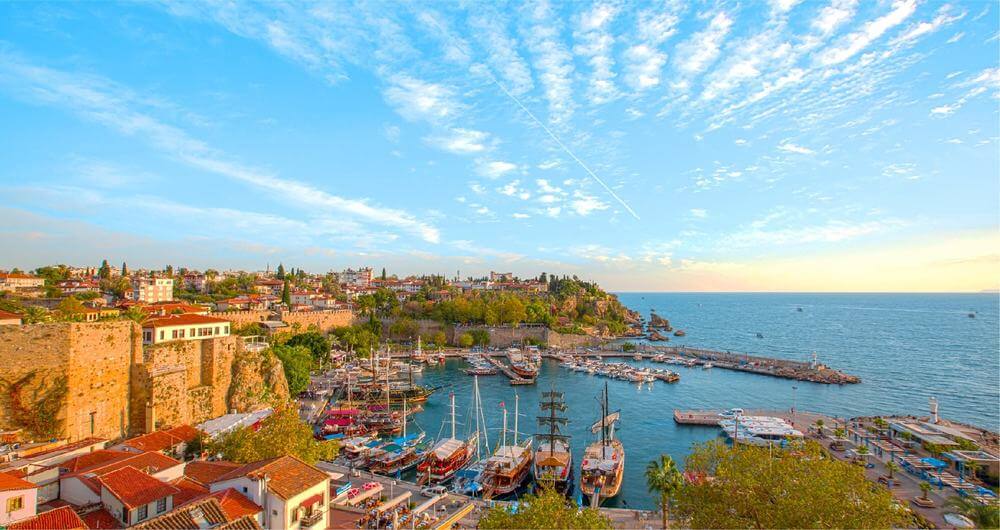 Antalya can be interesting not only for its famous sandy beaches, comfortable rest, but also for a huge number of attractions, parks, natural and cultural sites that you should definitely see.

Antalya has the distinction of being the 10th city that welcomes the most tourists in the world. Antalya, there are so many things to do in Antalya.

We have listed the places to visit and things to do in the city of Antalya, which hosts 10 million tourists every year.

The Old Town is the heart of Antalya, a popular tourist destination, in a small area of ​​​​which several famous tourist sites are located at once:

Hadrian ‘s Gate is considered to be one of the most beautiful monuments of Antalya. Their other name is the Triple Gate or Üçkapı.

Almost every tourist wants to visit here and take a photo as a keepsake. By itself, Hadrian’s Gate is a typical Roman Arc de Triomphe.

These gates have three identical arches, and the total height of the structure is more than six meters. The monument is built of white marble and gray granite and is very well preserved for its age.

The Clock Tower or Saat Kulesi is considered one of the symbols of the city. Initially, it was built as a fortification of the city from rough stones in a square shape.

Subsequently, during the Ottoman period, a clock was attached to it. Now the clock tower is one of the popular meeting places for citizens and guests of the city and at the same time the main entrance to Kaleici (Old Town).

You can discover these places with our Antalya City Tour.

Another popular symbol of the city is the Yivli Mosque, which is a tall minaret (tower) visible from afar. The mosque was built in 1230 and later reconstructed.

It is one of the earliest examples of Islamic architecture in Antalya. Yivli means corrugated in Turkish and you will understand why it got such a name as soon as you see the mosque for yourself. It’s all about the exterior of her building.

The Hidirlik Tower seems to have been specially created in order to admire the views of Antalya from its height. The height of the tower is 14 meters and it rises directly above the sea.

At one time, it served as a lighthouse for sailors, and according to another version, it was built as a bastion. Today, the Hidirlik tower can be viewed by approaching it along specially built paths.

Initially, Caravan Sarai served as a prototype of modern hotels and was intended for the rest of merchants who traveled along the Great Silk Road.

In our time, caravanserais (or rather, what is left of them) are of interest from a research point of view. Caravanserai Seljuk Khan in Antalya will please you with its antiquity and fame.

This mosque is located in the historical center of Antalya. It was built by order of the vizier and named after him. This mosque has one minaret and several domes.

In the old days, the mosque was reconstructed several times, but now its appearance and interior decoration traditionally attract residents and guests of the city. Nowadays, religious services and events are held in the mosque.

We have prepared a complete guide “Waterfalls in Antalya”

The Duden waterfall is one of the popular tourist spots. It is formed due to the features of the relief and is formed by the Düden River.

There are special places for observing picturesque landscapes and panoramas, as well as cute cafes and restaurants.

Kursunlu waterfall attracts tourists with its landscapes. It is part of the Aksu River and tourists and city residents often come here to relax in the shade of the park’s trees.

The waterfall is a place ennobled by the city authorities, where it is very pleasant to be. Time flies by here.

The oceanarium (here it is customary to call it an aquarium) opened relatively recently – in 2012, and quickly gained popularity among guests and residents of the city. Its building resembles a huge wave and is noticeable from afar.

He gained his fame due to the fact that one of the largest tunnels in the world is located in the aquarium – its length is 131 meters. Aquarium in Antalya is very interesting for both children and adults.

Perge is the ruins of an ancient city located within the city of Antalya. In the old days, Perge was built in close proximity to the river, the modern name of which is Aksu.

Excavations on the territory of Perge have been carried out since the 50s of the 20th century, but it is believed that most of the city is still buried underground.

The cable car to Mount Tyunektepe is a funicular that rises to the top of the mountain and then descends back. This is one of the favorite entertainments for tourists and locals, because a walk on the cable car allows you to see the city from a bird’s eye view.

You can climb over 600 meters above sea level in modern and safe funicular cabins. At the top you will be met by several viewing platforms and cafes.

Old City Marina is a beautiful and cozy place that deserves a visit while walking around the old city.

Once upon a time, fishing boats and large sailing ships moored here, and now the marina serves its intended purpose.

In Antalya, as in any other million-plus city, there are a huge number of museums – from historical to modern ones. We are sure that you will like one of them.

Some of the most famous museums in Antalya are the Archaeological Museum, the Ethnographic Museum, the Ataturk House Museum, the Sandland Open Air Museum of Sand Figures, the Toy Museum and many others.

Previous postThings to Do in Marmaris
Next postHadrian’s Gate